Bitcoin continues to evolve as the blockchain ecosystem grows to a global scale, and an increasing number of companies and industries look at using the Bitcoin blockchain to empower their existing businesses.  We’ve asked industry-leading experts to weigh in on what’s next for Bitcoin, why the next four years leading up to the halving are pivotal for Bitcoin and why Bitcoin SV is the future of blockchain technology.

What is the future of Bitcoin?

“Satoshi created Bitcoin and the blockchain to solve a number of problems.  As blockchain has been touted by many as one of the greatest inventions of our time, the future remains massive as companies and enterprises can now invest in new and innovative applications to create new business models, disrupt industries and earn new incomes with micropayments.”

“BitcoinSV has the ability to disrupt all industries and therefore change the world. I anticipate this continuing to grow and the prevailing question on blockchain is no longer ‘will blockchain technology work’ but rather ‘how can my business make this technology work for us?’ ”

“The future for Bitcoin SV is being the pipes for the future global data centric economy.  What this means is that everything will be centered around data, and the data marketplace.  Instead of data being harvested and resold without any compensation to those that provide the data, with Bitcoin SV, and the possibility of micropayments, this means that data (no matter how small) can be attributed, owned, and selectively paid for.  This will underlie the economy in the future.”

“When you think about it, everything in the digital economy is just transactions, and the only virtual commodity that is still being monopolized by the centralized aggregators like Facebook is data.”

“Understanding the future of Bitcoin is like trying to understand the future of the Internet on the day the first router was tested.”

“From the time of Plato, people have understood that money is a homogenising factor that allows for the broad exchange of goods and services but does this because it is not a combination of many systems but one.  Where we have an infinite number of monetary units, we end up with a system that becomes both disastrous and disintegrative making commerce more expensive and difficult.”

Why is the next 4 years, until the next halving, such a pivotal time for Bitcoin?

“2024 is going to be a pivotal time for bitcoin as the block subsidy reduces to 3.125 coins per block. It is at this point that the narrative about transition from block rewards to transaction fees will be a major issue for any miner who hasn’t already modified their business strategy, it’s not just about how to solve block puzzles, it’s then about how to compete in this new paradigm.”

“Because if transactional volume does not increase to make up for the drop in mining subsidies, then hashing operators will start to shut off their servers.  Bitcoin’s usage just as a ‘store of value’ will not sustain the industry through another halving.”

“Halvings are transition points where economics take quantum leaps toward a model where security and utility are functions of economic activity.  With each halving Bitcoin becomes more like money than money itself, but its money will have intelligence built in.  The next halving is probably the most critical as Bitcoin transitions from a subsidized to fully self-sufficient economic system.”

“We have now gone through a further halving, and only 6.25% of the original bitcoin issue remains available for distribution.  The diminishing nature of supply and bitcoin means that the coming four years will see only 3% of the total supply distributed.  Following the next halving, there will only be 1.5% of the total supply distributed in that coming period.  If nodes do not choose to earn money through the collection of fees, at this period, they will cease to exist.” 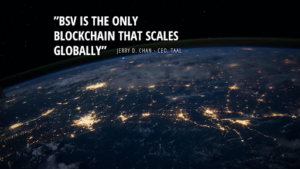 Why should business build on BSV?

“BSV is the only blockchain that scales globally, because it doesn’t cling to any notion of being ‘decentralized’ meaning avoiding regulatory accountability, and is a public blockchain providing all the benefits of a private blockchain (no lock-in to one service provider).”

“Millennia businesses have been trying to solve the problem of how to immutably record a transfer of value.  Bitcoin not only solves that problem but takes it one step further by enabling value to not just be in the obvious form of money but also in the form of information.”

“More than anything else, Bitcoin allows for a combination of privacy and the integration of controls that minimise or negate fraud.  This ability to protect against and mitigate fraud is incredibly valuable for external parties who seek to understand the business, including shareholder investors and creditors.  With a system such as Bitcoin, Wirecard and other previous financial disasters would not have occurred.”

“Bitcoin SV is the only project following Bitcoin’s original design and ‘Satoshi Vision.’  That means a stable protocol, and massive scaling to enable huge transaction volumes and data capacity, at very low fees, to support enterprise level applications.   That is what businesses need from a blockchain, and that is why Bitcoin SV will be the global blockchain used by all industries in the future.”

How did the halving event impact Bitcoin?

“Value must now be delivered on utility, not speculation.  This means the industry is about to undergo significant change and adjustment, those who are innovative and those who see the true use of this technology will survive and flourish.”

“We haven’t yet seen the full effects of the last halving, because operations normally have about six months or more in reserves, so it will be a couple months more before we start to see the first of the upcoming consolidations in the industry.  As it stands, there are already more and more hashing operations going on the market looking for exits, which is an indicator of the deluge to come.”

“This halving event has reinforced, more than ever, the need for Bitcoin ‘miners’ to depend less on ‘mining’ fresh coins via the block reward subsidy and transition to earn more of their revenue from ‘transaction processing.’  That is Satoshi’s economic design, and only Bitcoin SV fulfills this Satoshi Vision by massively scaling to support greater transaction and data volumes, and thus more transaction fee revenue on the network.”

Why do you believe TAAL has a bright future?

“The business value added by blockchain will surpass $176 billion by 2025 and $3.1 trillion by 2030. Not to mention venture capital investment in blockchain achieved a record high of $512 million in 2017, up from $15 million in 2013. TAAL is taking advantage of this growing but nascent opportunity and allowing investors to do the same by providing a pureplay on the enterprise adoption of the growing global Bitcoin SV (BSV) blockchain network.”

“TAAL is at the forefront of innovation in the transaction processing space, having identified Bitcoin SV as the public, permissionless blockchain technology that is delivered via a stable, scalable platform.  TAAL has now developed a vision to support enterprise investment with high scale transactional processing, with specialised hardware and services to propel blockchain usage and application development.”

“Because we are not basing our business model on the price appreciation of digital assets.  We are basing our business on transaction throughput.  This is in line with the organic and natural scaling model that as usage scales up, so does our revenues, and thus our ability to spend more capital into scaling up our transactional processing capabilities.  Only in BSV is this possible, because there are no protocol level scaling restrictions, and instead scaling is left to the infrastructure companies such as TAAL to implement.”

“It’s absolutely powerful with its widgets, to its plug-ins, to its block explorer tools, to the search function. There are so many ways you can use WhatsOnChain”