Switzerland is home to many novel ideas. Think watches, army knives, and even Velcro. So it’s no wonder that one of the most intriguing new projects in blockchain is taking place in the Swiss Alps.

The endeavor is a joint venture between K51, a Swiss engineering company, and TAAL. Through their combined efforts, a power station now houses a container of digital asset miners. TAAL has imported 200 of its mining computers from Canada and the K51 team has built the container and positioned it inside the power station specifically to accommodate BSV transaction processing. A diesel-powered heater that would use approximately 4,000 liters of fuel per month to provide heat for the facility has been replaced by the heat from TAAL’s mining computers.

No longer is the Handeck Power Station producing carbon dioxide from a diesel-powered heater. Instead, the energy produced from the TAAL computers generates the heat necessary to keep the power station warm through the winter season. That heat generated is also sent to the roof to melt the snow that accumulates on top, saving it from collapsing. The heat produced from the mining computers causes the station’s temperature to rise to 29 Celsius degrees, enough for both outcomes to be achieved. 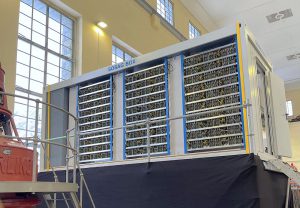 It’s one of those beautiful and rare synergistic collaborations where everyone wins. The facility continues to produce hydroelectricity but with a lower carbon footprint from reducing unnecessary carbon dioxide emission from the heater. K51 is able to prove out its clean-energy concept. The BSV network gains access to more data capacity. And TAAL gets a foothold in Europe for its transaction processing operations that increases its overall hashing power.

“The K51 guys are truly entrepreneurial,”

“We’ve been delighted to partner with them. This project demonstrates an innovative use of the offset heat. Other facilities are putting in air systems to generate airflow and dispel the heat, but with this case we are doing a capture and it’s being translated into power production.”

The petahash added to the TAAL network is small but the importance of the K51 project is about much more than the data capacity it provides. The initiative shows that BSV mining can benefit communities in ways beyond providing employment and utility value.

“What K51 has done is present an interesting way of thinking about how and where a Bitcoin mining fleet runs,”

The project is located in the village of Guttannen, which is about 90 minutes by car southwest of Zurich. It was launched in February and is scheduled to have a run of about four months, when final results will be gathered. The performance thus far has been so impressive that TAAL and K51 are already considering other joint ventures.

Follow day 2 of the @BlockchainConv event from #Dubai, live here on Twitter or on the livestream at: https://www.youtube.com/watch?v=RzJsCRb6zt8