TAAL’s sales team is in demand. Not only is interest constantly growing among new and existing clients, but a variety of industries are keen to learn more about TAAL’s transaction processing, tokenization and metanet services built on the BSV blockchain. The sales team led by Chief Commercial Officer Kal Suurkask, Business Analyst Nathan Cropper and Business Development Associate Cameron Anderson attended a number of notable events as speakers or panelists in June. Here are highlights from their activities.

Kal Suurkask was a panelist for the World Gaming Executive Summit, held in Barcelona from June 28-June 30, 2022 and with an attendance of more than 1,000 people, mostly senior executives of the industry.

His discussion covered, “A Cashless Society”, including what payment innovations are expected during the next five years in the gambling industry. The panel explored the need for the best mobile gaming payment services that support in-app purchase and rewards. Of notable interest was the idea of instant withdrawals and how blockchains — particularly BSV — could enable such real-time functionality, in a fully transparent and cost-effective manner. It was debated whether Central Bank Digital Currencies and stable coins issued by banks could be a viable option in the near future for gaming. BSV’s advantage of being a single source of truth could position it as a global ledger that is ideally suited to protect online gamblers.

“Attendees were generally interested in how blockchain, specifically BSV, could be used for the future of gaming. I touched on using web3 digital wallets, where users control public and private keys and can control their player experience, porting over their playing history, earnings, and credentials across a number of gaming platforms. This utility value ties in nicely to player protection with self-exclusion lists being shared across multiple gaming platforms,”

Blockchain-based games, which feature instant leaderboard games with micropayments and instant settlement, are gaining popularity. The trend ties in nicely to the next step in gaming, where operators seek to attract the next generation of customers through innovation.

The conference has already resulted in a number of sales leads for TAAL as the gaming industry begins to realize the value the BSV blockchain provides as it can underpin a new era for the industry.

Suurkask also attended the SiGMA AIBC Conference in Toronto from June 6-9, presenting “TAAL – Your Enterprise Blockchain Transaction Processor” to the audience. He ran through various aspects of the company’s blockchain infrastructure services and how they are critical to the growth in technical development of BSV.

“There was a large BSV community presence at this conference and the Bitcoin Association’s booth generated a solid amount of buzz. Attendees approached us with zero knowledge of TAAL’s services and left impressed with our ability to assist with cost-efficient scaling of their operations,” Suurkask said of the conference that was attended by approximately 3,000 people.

A number of leads from the entertainment and gaming industry have opened as a result of the conference.

In London, Nathan Cropper was among the approximately 200 attendees at the Reuters Payment Summit Europe on June 28-29. The payments industry was investigating how to make open banking more efficient, improve account-to-account transfers, and advance interoperabilty.

“The attendees were shocked to hear about what TAAL is enabling with the power of the BSV blockchain,”

Cropper reported, noting that TAAL can provide the solutions to make data and payments more efficient and productive.

“The attendees only considered blockchain in the use of an asset class. So to hear of the many use cases where TAAL’s technology is being applied and to learn of the many benefits it can provide was eyeopening for the audience.”

He noted that many attendees referred to crypto “as the elephant in the room”, remarking that nothing of significance had been accomplished in the last 13 years as far as adding value to business operations. For TAAL, that concern means opportunity because the company is uniquely positioned to demonstrate the utility value of its solutions built on BSV.

No surprise then that many of the attendees will be following up with the TAAL team to learn more about products and services such as the TAAL Console, WhatsOnChain.com, and the STAS token. 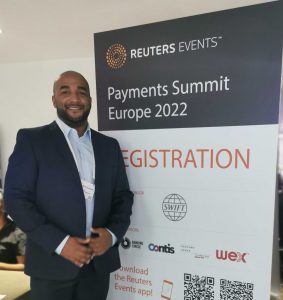 Cameron Anderson was among the TAAL members who participated at the Collision Conference in Toronto from June 20-23. The massive tech conference included more than 35,000 attendees.

“We had the chance to network with a wide range of tech companies ranging from up-and-coming game developers to established logistics companies,”

“Tokenization was a talking point in virtually every conversation and we uncovered a massive opportunity within the carbon credit trading market.”

Following up on that lead and others will be a focus for the rest of the summer. The sales team will also be conducting a workshop with a carbon offset platform to analyze how TAAL can take its blockchain operations to the next level.